What is more peaceful than a late shift at the area control center Düsseldorf, at three in the afternoon, assigned to the FIS position. FIS is a working position with a basic radar, a radio frequency and with the outlook of a light workload.

December 31 anyway is a “dead day”, commercial flights are extremely reduced, and private pilots usually handled by FIS are few in the air.

So my friend Dave, an Englishman working for ATC as a “runner”, and myself had set up our chess-board. Dave quickly recorded the current ATIS, then – we would have peace for at least 20 minutes! Dave didn’t have a license for recording the ATIS, but as an Englishman he sounded very professional!

Well, one can’t imagine today, but at the beginning of the 70′s, at the beginning of my career at ATC, it was still so peaceful. At that time Düsseldorf had about 12 commercial flights a day, on top of that 2 postal-flights at night, all of them propeller aircraft. For insiders: There were Vickers Viscounts, Super Connies, Electras and others.

So Dave and I “chessed away”, we wanted to be done by 4:00 pm, then our first break would start, lasting until 5:30. Actually, as mentioned, ATC at that time was a peaceful job, but as always us Germans liked to complicate things.

Radar-control takes place (at that time) in dark rooms without windows. Access to those rooms is normally not possible for the ordinary human being and strictly controlled. But every now and then a group of visitors managed to get access, they were guided as a horde to the “ape-rock”, as we called it, a gallery at the head of the control room.

Visitors on the ape-rock could yet admire our British colleagues at our facility, soldiers responsible for the British airspaces within the Düsseldorf control area, who were situated on on side of the control room, sitting in front of their consoles. The “boys” were in their uniforms and looked really handsome. That had triggered the terrific idea in our “belle etage”, to put the rest of the control personnel into shirts, suits and ties! It would make a better and more professional impression onto visitors, they argued.

Now ATC personnel is, because of the very hard and strict selection they have to undergo when applying for the job, the very complex training, the tremendous responsibility on the job and therefore the resulting pronounced self-confidence quite a peculiar bunch of people! This explains why normally ATC personnel doesn’t argue with any belle etage, but make their standpoint clear by actions.

So it was the case, that being the last day of the year, everybody was dressed like at Mardi Gras! Dave wore a t-shirt with a picture of a naked woman, I wore one which had a suit and a tie painted on it. All the others had similar things on, had funny hats on their heads or wore other gimmicks!

In the 70′s it was still the customs that the head of the whole control-unit (the LDF, as he was called) would show up in the control room at special holidays and shake hands (with his sweaty hands) with everyone on duty! What for, that remained his secret until today! We surely weren’t sad if we had any chance to miss that ceremony! But today, the opportunity was perfect, since the LDF was expected again!

Unfortunately (for him) today, because the last day of the year seemed to be a special occasion, the top-boss of Düsseldorf airport and the station manager of Lufthansa Airlines at Düsseldorf came along! Those two had looks on their face as watching the wrong movie! The LDF was just red in the face, but I mean red! He whispered into everyones ear “… this will have some consequences”. He completely forgot the shaking-hands, so our masquerade had succeeded to save us that ceremony! Naturally everyone was smirking, Dave tried a belly-dance and I acted like a waiter. Only the British stayed cool, but they were always cool! We could imagine how the LDF tried to explain to the visitors that what they had seen there wasn’t normality. We surely had wanted to be able to listen to that explanation!

The whole thing – didn’t have any consequences, naturally. Not because of the masquerade, but there wasn’t any money for work clothes.

The FIS working position was peaceful until – some private pilots had noticed there is someone reserved solely for them! I found myself busy all over sudden to guide Speedy, some Düsseldorf “underworld” king, in his Bonanza home to the airport. Dave suggested sometimes those private pilots will even ask us to reserve a table in a restaurant for them and to provide the menu on the air!

Well, I didn’t care, I had to sit here anyway. Speedy managed to reach the airport in time for the relief to take over. Dave suggested to come along to his house to have coffee and even announced our arrival to his wife.

The Englishmen, a small but very compact group in Düsseldorf, celebrated the last day of the year in a very special way. The wifes stay home, and the men wander from house to house and will be waited on by the wifes! When someone couldn’t walk any further, he just stayed put where he happened to be and then later went home. Much later, most of the time!

Dave meant, I should participate in this, it would be something new and different from most of the parties I would usually go to at the end of the year!

Only problem with that is the uncertainty, where you will end up later more or less disabled! And if you have another shift the next day at nine in the morning, and if you consider that 12 meters (hours) before a shift you are not supposed to drink any alcohol, the idea seemed quite dangerous to me. Instead I felt a tendency to accept an invitation by Peter to attend his party in Bottrop.

Fortunately I met Claudia at Dave’s home. She was a friend of Dave’s wife. Claudia didn’t feel like having drunk Englishmen trying to attract her all night either, since this is how it usually ended up, quoting Dave’s wife. So I arranged with her to take her along to Bottrop after my late-shift was over.

My shift was soon finished, the party in Bottrop was quite unidirectional, slanted towards Claudia, I would say. With other words, Claudia (my later wife) and I started to be together!

At such events the time flies, there was only time for a quick breakfast at the Bottrop railroad station. Then my next shift …

Dave didn’t look very good when he showed up at work! But you had to give him credit that he came to work after all. He even lasted through his whole shift, however he couldn’t walk straight, and no word about chess, although air-traffic was light on New Years Day also! Myself, I wasn’t feeling too good either, but that was compensated by pleasant thoughts and memories about the past day. 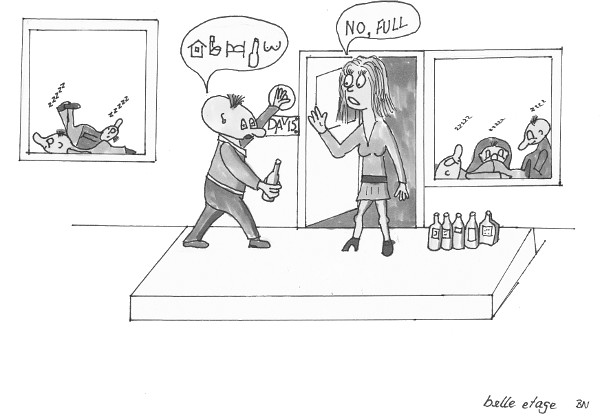