This is another adventure I experienced because of the International Air Traffic Control Net!

It was September 1984. In the aviation world an interesting and exciting project was under way.
Joe W. Kittinger, the guy who had broken the record of the highest free fall from a balloon raising into the stratosphere (the Excelsior III, at altitude 102,800 feet/31,300 m on August 16,1960) was on its way again. This time he wanted to cross the Atlantic Ocean as the first solo aviator in a balloon.

Those aviation adventures usually were discussed or even covered in the I-ATC Net. Ernie, W1BFA, had good connections and kept all of the net-gang well informed. On many of those adventures even the participants were ham-radio operators and would eventually join in to the net.

On September 18 I came home from early-shift, and as often before lunch I switched on my radio to see or rather hear what was happening on the I-ATC Net frequency. Ernie was on, off course, and I heard him talk to N4HDP, which was Joe Kittinger in his balloon! Wow!! But – I could not hear Joe. He had already crossed the Atlantic Ocean and was still flying his balloon somewhere south of the Alps in northern Italy. Apparently he was trying to set a new record!

It is very common on the picky lady shortwave that you can hear someone from far away, Ernie in Maine in this case, but you cannot hear someone nearby. From my location to Joe’s balloon it was only 300 miles or so, too short a distance for the radio-waves to be bounced back to earth. What a pity, how exciting if I could have talked directly to him!

But then – Ernie called around telling everyone on the net that Joe had wanted a current weather report and forecast of the area ahead of him. The weather seemed critical, and he wondered whether he should finally land his balloon. The closest aviation facility for him seemed to be Genoa airport.

There seemed nobody to be able to fetch that weather report. But – at my work it would be possible to get that report within a blink of the eye! The Söllingen Sector only needed to call the Zurich guys and ask them about a current report! Gosh – I got on the phone and called my work.

A telephone call into the control room always is answered by the active watch-supervisor, which happened to be Paule. Paule was well known and dreaded for his light temper, which he lost regularly when things out of the ordinary happened. When I identified myself and asked him to tell the colleagues on the Söllingen Sector to get a Genoa weather, for sure he lost his temper: “What the hell you need that weather for, you are off duty!!” I patiently tried to explain to him, and luckly he didn’t say nothing further, but did as I asked him to. A few minutes later he spelled the weather report to me on the phone. These reports are written in an international abbreviated code called METAR, which every aviator can read and understand, we had to learn this code amongst other things during our theoretical training at the ATC school. So it was not difficult to copy it down.

After thanking Paule for his “tremendous help” I got on the shortwave and spelled the report over to Ernie in Maine. Ernie then repeated the report back on the air, so Joe in his balloon could copy it. Since I couldn’t hear Joe, he also couldn’t hear me! The report said that there were numerous thunderstorms reported and forecasted in the Genoa area. So Joe didn’t think about it for a long time, but decided to end his record flight and put the balloon down, since a continuation of the flight into a thunderstorm was too dangerous. Eventually Ernie lost contact with him, with the balloon being too low during the final phase before landing, and also because Joe was too busy with the landing to continue blabbering on our net!

Later on I learned from the News that the balloon had landed successfully, but it was a hard landing in rough terrain! Joe had broken a foot during landing! I surely felt bad about it, was my weather report the cause of the broken foot???

But in the long run I suppose it was good that he put her down. Thunderstorms, you just don’t mess with them. And – after a while, I got a nice QSL-card from Joe confirming our contact we had via Ernie! 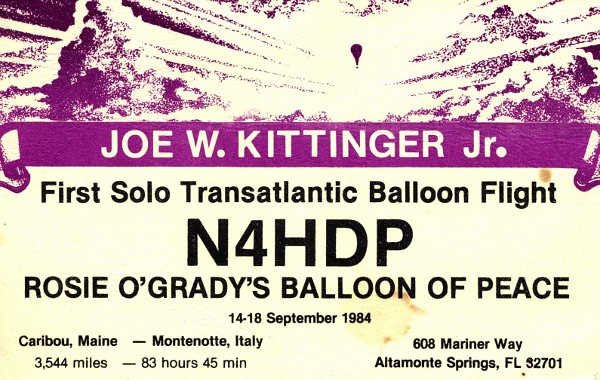 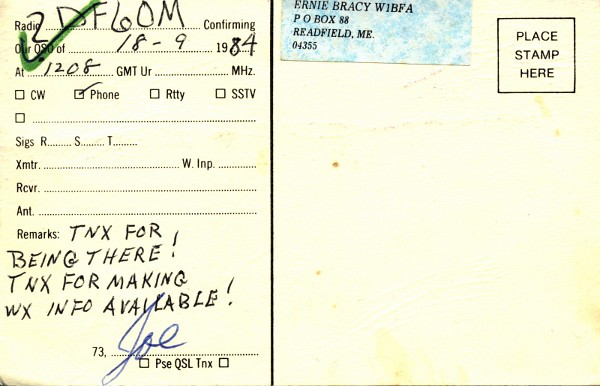