Tower at Düsseldorf airport, my favourite working position. It was something special. Many people think, the whole business of ATC takes place at the tower, but it is not so. Tower is only responsible for the runways, for flights departing and approaching them, and for the taxiways leading from and to the apron.

The tower is normally manned by a tower controller, responsible for runway traffic, a ground controller for all ground movements on the taxiways, and an assistant, responsible for coordination and clearance delivery. These 3 were the rulers over the entire airport! Nothing happened without their approval, and even more important, nobody could interfere in their business, their word was law!

It so happened that Ulli and I went to night-shift. Night-shifts were handled by only 2 people, because night-shifts at the tower were but exciting business, it rather was, after the 2 mail-flights from Berlin, more than boring. The airport was sleeping, until early morning.

Dark, lights out and quiet.

During night-shift one agreed in advance, who could leave and rest, there was a recreation-room on a lower floor. To kill time until morning we had developed different hobbies, like great circle course calculations or building model airplanes. Ulli was fiddling about with his brand new calculator, one of the early ones which were programmable while I was working on my JU 52, the “Aunt JU” as this airplane used to be called. After 2 hours of quietness Ulli disappeared downstairs.

I kept on working on my model when suddenly there was a squeal on the emergency frequency 121.5. I knew that squeal: An ELT was sending a bailout signal. Every aircraft has such a thing aboard, and in case of an accident that signal is generated.

So I didn’t expect anything good.

Soon enough the phone rang, and the Search and Rescue Center from Cologne wanted to know whether we could hear that signal, which I affirmed.

Apparently Ulli had turned the ringer off of his phone in the recreation-room, he simply didn’t answer! Cologne wanted to have my bearing on that signal.

To circle in the source of the signal I woke up the personnel at Essen airport and asked them for a bearing on that signal too. This I passed on to SAR Cologne, and soon afterwards they told me the approximate position of the source, as they had calculated.

It was our General Aviation Terminal! 2 minutes later Cologne called again and confirmed the launch of their SAR-helicopter!

The whole Düsseldorf airport seemed asleep, the only guy I could reach was at hangar #8, a janitor! Hangar #8 belonged to LTU Airlines and was located at the other end of the airport. The only vehicle which was available to this poor janitor was his bicycle, I asked him to ride to the GAT and check. To help him find his way, I switched on all taxiway lights. Radio communication was not possible, he had no radio!

Cologne called again and informed, the helicopter would arrive in 10 minutes!

From this time on I was only a spectator, because of lacking communication with the janitor. But what was there to see!

To help the helicopter also find his way, I now had turned on all lights of the airport and set them to 100% intensity. Quite a light show in the middle of the night!

The janitor had reached the GAT in the meantime and had disappeared together with his bike. The helicopter was in sight, about 2 miles south of the field. And there was the janitor again on his bike, on the carrier of the bike was a red box. The box which was responsible for the noise on 121.5! The helicopter was just starting to hover above the GAT, then it swang around and followed the bike, since his direction finder showed him the bearing to the source of the signal. It literally plunged onto the poor biker! That one, scared to death, pedalled as hard as he could.

Unfortunately I didn’t have radio-contact with the helicopter either, so I couldn’t help. But the janitor was a smart guy, he’d figured out that the helicopter was after him. Therefore he chose his way around and through obstacles, houses and objects, so the helicopter could only see him at times. An enthralling race started, between bicycle and helicopter. It seemed the biker would win!

Finally the janitor arrived at his hangar #8 and disappeared. The helicopter hovered 5 meters above ground in front of the hangar. Nothing else happened. Suddenly it was quiet on 121.5.

SAR Cologne called and stated: “Helicopter returning to base!” A call to the janitor finally made things clear. In the GAT mechanics hat put this ELT into a private business jet yesterday. Somehow one of the mechanics must have forgotten to bolt down this thing, so gravity won and the transmitter plunged down onto the ground. According to his design it started blaring out its emergency.

The janitor had found the thing and put it on his carrier. He was quite familiar with these things and knew: It will whine as long as there is juice in the battery. So he took his ax and demolished the box, until it shut up!

I spent most of the rest of my night-shift making entries in the daily log. When I was about done, Ulli showed up all sleepy and wanted to know what had happened, he didn’t sleep well! I showed him the entries in the log. Somehow – we were able to laugh about it already.

At six in the morning sharp Sister Agnes from the deaconess hospital called and complained about the nightly noise. We didn’t mind, we knew her. She complained about everything all the time! 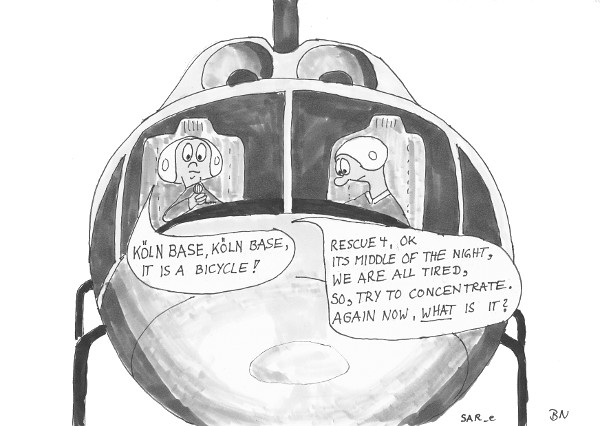